I have to say some people have great imaginations which amazes me. Somehow some people think that 5G can cause coronavirus. How they managed to link the two topic together is beyond my comprehension.

I would like to improve my creativity. To this end, I am trying to come up with a conspiracy theory between Huawei and Mulan. The full name of Mulan is actually Mulan Hua (in the format of forename-surname). I have to emphasise that the “Hua” in Huawei“ is different to the “Hua” in Mulan Hua.

Anyway, the conspiracy comes from the picture below - the decorative drawing on Mulan's forehead appears to be a diminutive version of Huawei's logo. Is this a coincidence? I think not. 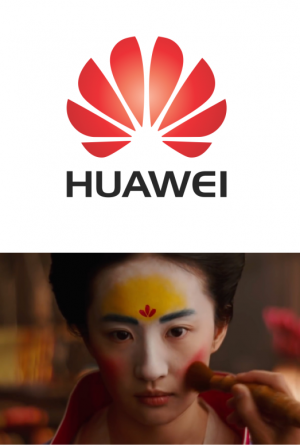 Anyways, to make this more of a thing, I tried generation text using GPT-2 with the prompt “Mulan's relationship with Huawei is something which is still shrouded in mystery”. Here is the output:

Mulan's relationship with Huawei, according to GPT-2

At the time, Mulan was still only 28, her association with Huawei was limited to a small group of executives, and she did not make any formal commitment to the company. In an interview with CNN, Mulan described how she was invited to a meeting of Huawei executives at Huawei's headquarters, where they discussed the possibility of partnering in the development of a range of high-tech products . These included smartphones with an augmented reality feature, smartwatches , and a cloud computing platform for high-volume business needs. Mulan also said that the executives were keen to take on a large-scale venture into the world of IoT (Internet of Things).

The Huawei executives were impressed with Mulan's vision and enthusiasm, and asked her to work closely with them. However, she was not offered a position at Huawei, and was instead told that she was “one of the few young, talented, highly educated female engineers and technologists to have a shot at the top of Huawei's new technology leadership team .”

After the Huawei executives made their pitch to her, Mulan was approached by a group of Chinese state-backed media companies to speak at a Beijing event, where she spoke about the potential of Huawei's technology to revolutionise China 's industrial and infrastructure development and the importance of the Chinese government 's support for the company.

Except where otherwise noted, content on this wiki is licensed under the following license: CC Attribution-Noncommercial-Share Alike 4.0 International